Those who have been closely following my journey through chronic fatigue will remember my tedious recovery routine, which I described back in March. The routine involves multiple daily rest periods in which I’m allowed to do very little except drink tea and look at trees.

I’m also allowed to pat a pet, but as I wrote at the time, ‘This sounds great, except I don’t have a pet (I am in the market to borrow your pets, if you don’t mind bringing them by five times a day, or just donating them for the duration of my illness).’ Someone suggested I get a cat, but I was pretty certain no cat would permit the strict patting routine my recovery program requires.

Still, when I was offered the opportunity to look after two cats over the holidays, I wasn’t going to turn it down. Especially because the cats live in a gorgeous house in Singapore, a house belonging to a friend who is both a talented artist and art collector.

Cat One would occasionally allow me to pat her for part of a break. When she was happy, she’d headbutt me. She also had a tendency to drool huge puddles when I scratched her ears. She was a sleek goddess of a cat with pure silver fur, always slinking off. 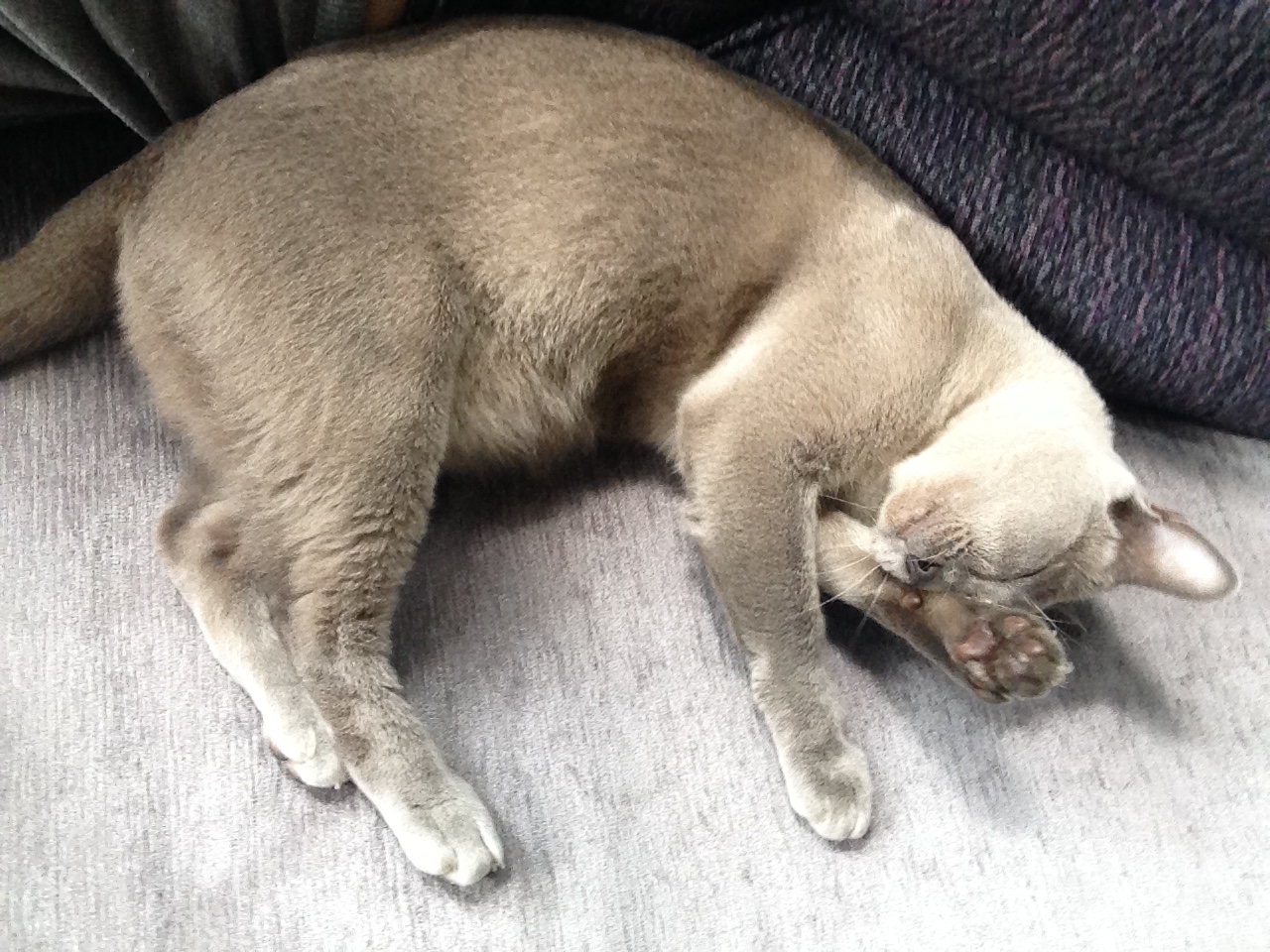 Cat Two loved sleeping on keyboards. That was his thing. Here’s his little tail twitching in utter delight because of all those plastic keys under his fur.

They had fancy cat names, but I was too tired to remember them, and they didn’t answer to them anyways. They’re cats. We called them Cat One and Cat Two because that was the order we met them in (Cat Two managed to get himself locked in a bedroom before we arrived, and required first locating, then rescuing, hence his secondariness).

Cat Two almost never allowed me to pat him during my rest breaks, because my breaks didn’t involve a keyboard. But he loved it when I sat down to write, which I managed to do most days for an hour or two. As soon as I sat at the desk, he’d appear in the doorway, jump onto the desk, and flop onto my keyboard and papers. This earned him the nickname Flopsy Mopsy.

He’d lie on the keyboard, purring like a little engine, and stretch out his paws one a time, like he was doing cat yoga. He also liked to rub his jaw on the corner of my laptop screen. When I wasn’t looking, he’d try to drink from my water glass. He did this so often, I eventually I brought him his own water glass.

When he tired of me, he’d leave abruptly and head to the hottest room in the house to spend the day roasting. He’d lie in the sun, and when it had moved past the windows, he’d press himself against the wall to absorb as much heat as possible. I was surprised he didn’t shrivel up like a raisin, though perhaps this is because I followed him around with his own personal water glass.

Results of the study: my hypothesis was correct, cats are not ideally suited to chronic fatigue recovery routines. However, I felt better in Singapore than I have for the past few months. So perhaps patting a pet at any point during the day can have positive health impacts. If anyone has several alpacas or a domesticated fox they would like to lend me, I’d be happy to continue the study.