In 2015 I visited the Kingdom of Bhutan, a tiny Himalayan country wedged between China and India, like a pea delicately set between two butt cheeks. Bhutan is world renowned for its Gross National Happiness philosophy, which the government believes is a more important metric than the standard GDP. It’s less renowned for its history of ethnic cleansing, which forced more than 100,000 people out of the country and into refugee camps in the 1990s.

One other notable cultural aspect of Bhutan is that everyone is really into anatomy, specifically one region of male anatomy.  For example, one of the local drinking establishments is named Phallus Bar. Their slogan is  –  this is true  – Experience the nectar of Phallus Bar.

(I didn’t experience the nectar. I kind of regret it.) 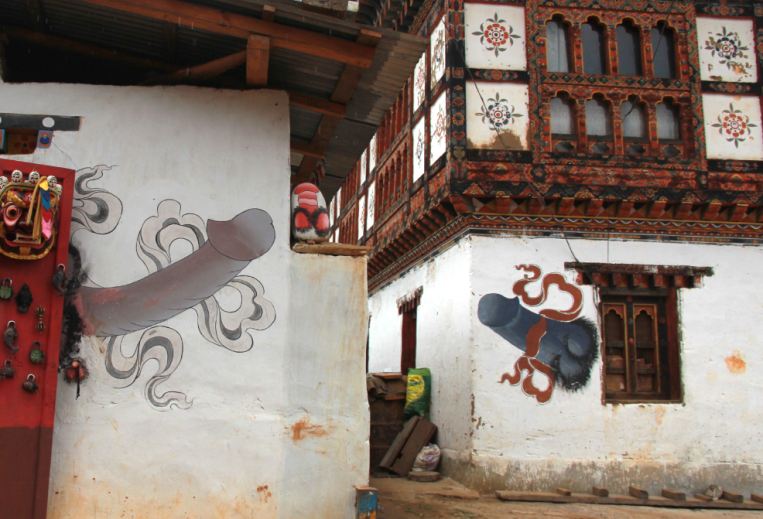 In villages in Bhutan, if you, as a male property owner, want to indicate to your neighbours that you’re strong and virile, you paint a giant phallus on your house. This is one of those cultural aesthetics that is perfectly acceptable in the region it originated in, but if that same Bhutanese guy were to move to the West, his neighbours may not appreciate his exterior decorating style. Or they might. It really depends what neighbourhood he ends up in.

This obsession dates back to a Bhutanese religious folk hero, the Divine Madman. He was both a Buddhist master and ladies’ man, judging by his reputation as the “Saint of 5000 Women.” The Divine Madman used his “thunderbolt of flaming wisdom” (his term, not mine) to kill evil spirits. He was basically an x-rated Buddhist superhero.

This is all to let you know that in May, a monologue I wrote after my Bhutanese travels is being performed at Voices of Women in Sydney. It’s called “Tonight’s Performance: You’ve Definitely Got Rabies” and it doesn’t require you to know about the Divine Madman, Phallus Bar or anything about Bhutan. But aren’t you glad you do?